Is it possible to find objects that have sunk, to search not immediately, but after some time?

Police and rescuers often have to deal with such search operations. Also, treasure hunters who spend a lot of time in the water are engaged in underwater searches. This is especially true of those places where there are standard or “wild” beaches, as well as recreation sites near the water (rivers, lakes) in forests, in the mountains, on the seashore.

Until recently, such tasks as underwater research and search for objects were available only to professionals. Only special groups of divers could find something at depth. However, over the past decades, a lot has changed, and nowadays, modern technology for searching for objects at depth has become available both to private companies and even to individuals interested in such work.

The use of an underwater drone gives great advantages when examining underwater structures, ships, and when searching for sunken objects. The remotely controlled underwater drone can be used at depths of up to 100 m and deeper, in the absence of lighting and sufficient water transparency. During the inspection, the video is recorded in Full HD quality, and the image from the camera is displayed in real-time on the operator’s display.

For owners of water transport of any displacement, an underwater drone is a more profitable choice compared to the services of a diver.

Deep-lying pipelines, cables, tunnel-type structures can be surveyed using a semi-professional class ROV. Drones provide not only filming of everything “seen” by a video camera, but also broadcast images in high resolution.

An underwater ROV can be used as an alternative to diving inspection, or as additional equipment during diving operations, and at the same time, using an underwater drone will help save money on diving, and often eliminate the need for divers.

Also, you will get excellent advantages when you are performing seabed surveys and research works by ROV in combination with sonar. At the same time, the sonar allows you to get a detailed picture of the bottom and objects located in the depths, and ROV adds to it a video of objects and constructions.

Using an underwater ROV, you can search for sunken vehicles and people, as well as for lost watches, underwater cameras, dropped air drones and lost jewelry.

Thus, it is safe to say that in-depth search jobs are becoming more and more accessible to everyone. Today, the search for objects in the lake can be performed not only by a professional team but also by individuals using ROV. So, if you have always dreamed of finding a chest of gold or other treasures of antiquity underwater, then today you have such an opportunity. Even if your quest is not crowned with grandiose discoveries, exploring in-depth is in any case a lot of fun.

For this survey in-depth, we used one of our small drones RB-100D. it is capable of diving to a depth of 50 meters, equipped with an excellent FULL HD camera and 4 light. This car has been underwater for a long time and all overgrown with algae and covered with bottom sediments. 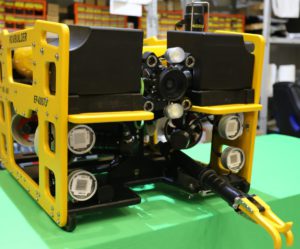 What is the shelf? Why our ROV RB-660D? It is a coastal, relatively shallow sea or oceanic zone with depths

Video diagnostics of water pipelines by floating drone RB-110SP The pipelines are located underground or even underwater. Despite their large

Underwater ROVs are quite complex mechanisms. However, thanks to their perfect design, underwater drones could make complex technical tasks underwater.